First cycle of the Operation Cinema and Foundation 787 workshops completed 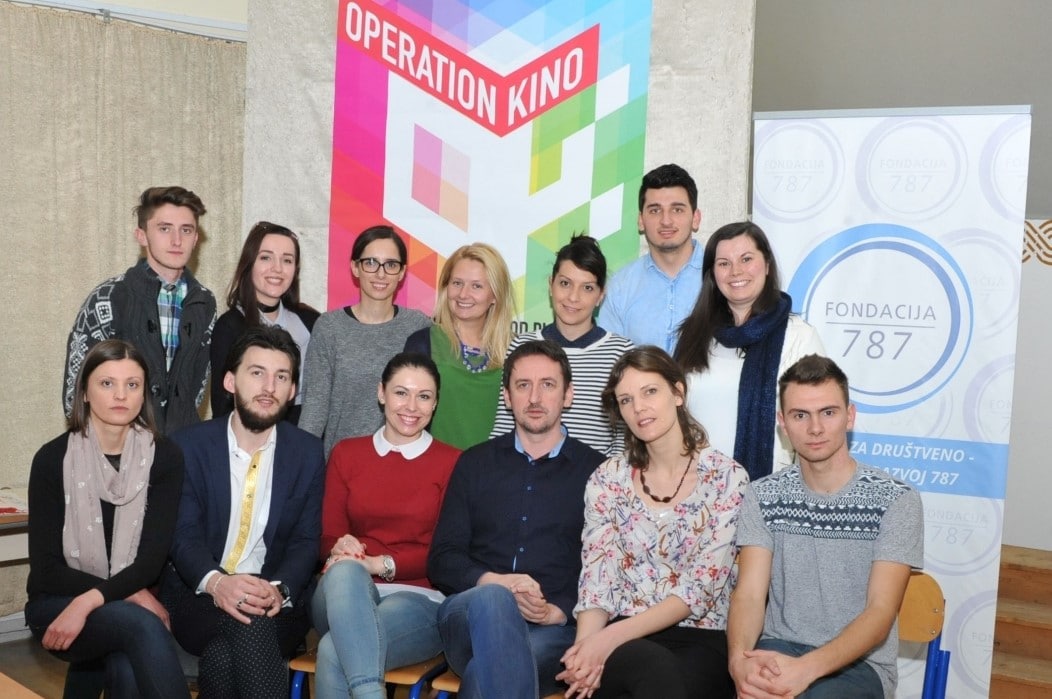 Within the travelling project of Obala Art Centre and Sarajevo Film Festival, Operation Cinema, implemented with the support of the Embassy of Kingdom of Norway, Europa Cinemas and FBiH Ministry of Culture and Sports, in the past 5 years completed more than 150 film programs in cities all over B&H, marking over 40 000 visits and more than 350 young people on its film workshops.

Workshops, which have been implemented in the past three months, are a product of collaboration with the Foundation 787 and promote social activism and entrepreneurial culture among young people, and establishment of their proactive stand and active participation in socio-economic and cultural activities.

Third and last part of the first cycle of the Workshops was held in the Cinema Hall in Posusje, from April 01 to April 03. The focus of the workshop was drafting and development of the proposals of implementation of activities within Operation Cinema project in different cities of B&H.

Aside from the active work on the preparation and presenation of their activities, on the first day of the Workshop, the participants had an opportunity to learn more about event marketing and listen to inspiring stories of Amra Bakšić Čamo, founder of the production company SCCA/pro.ba and teacher and the Academy of Performing Arts and of Jasminko Halilović, president of the Association Urban and Global Shaper.

In the next three months, under the mentorship of the Foundation and together with the Operation Cinema project team, the participants will work on the implementation of the drafted proposals of activities, which is the second and practical aspect of the Workshops.

Ena Rahelić, Project Manager, Operation Cinema: Aim of the workshops is to create a network of young people, a new generation of activists and entrepreneurs, who would contribute to the increased effect of action on local level and establishment of programs for youth. It is a great pleasure that we had the opportunity to learn, work and spend time with a unique group of young people from B&H. Filled with positive energy, we continue with the preparation and implementation of joint projects and activities, which will be implemented within the summer tour of Operation Cinema.

Zvonimir Jukić, Posušje: I would like to commend Operation Cinema and Foundation 787 for all the effort they invested in the past three months and I believe that the most important product of the Workshops is our future collaboration. The very manner on which the workshops are concepted offers a diverse view on several thematic sessions, which is one of the biggest advantages of the workshops. The last workshops was my favorite because the focus was on team work which made everything more approachable and complex. All in all, I loved cooperation, spending time, learning and I am looking forward to the future collaboration.

Dajana Džindo, trainer and Executive Director of Foundation 787: We are happy that, together with Operation Cinema, starting in Sarajevo, via Banja Luka we came to Posusje with a group of young people from the entire B&H, who had an opportunity to acquire various practical skills and knowledge and plan concrete activities which they will implement in the summer period in their local communities. They represent positive examples of proactive individuals who with their will and work show that it is possible to improve the quality of life of young people in smaller communities in our country. By supporting these workshops, we at the Foundation 787 want to demonstrate that the development of entrepreneurial spirit is possible in the ares of culture and film as well and with great pleasure we will support them through mentoring in the upcoming period.

The certificate on the completion of the program on leadership, menagement and entreprenurship for young people from Banja Luka, Bratunac, Goražde, Gračanica, Mostar, Posušje, Sarajevo, Široki Brijeg, Zvornik and Žepče will be awarded within the program of Operation Cinema during the 22. Sarajevo Film Festival.